Lockscreen and Authentication Improvements in Android 11

As phones become faster and smarter, they play increasingly important roles in our lives, functioning as our extended memory, our connection to the world at large, and often the primary interface for communication with friends, family, and wider communities. It is only natural that as part of this evolution, we’ve come to entrust our phones with our most private information, and in many ways treat them as extensions of our digital and physical identities.

This trust is paramount to the Android Security team. The team focuses on ensuring that Android devices respect the privacy and sensitivity of user data. A fundamental aspect of this work centers around the lockscreen, which acts as the proverbial front door to our devices. After all, the lockscreen ensures that only the intended user(s) of a device can access their private data.

This blog post outlines recent improvements around how users interact with the lockscreen on Android devices and more generally with authentication. In particular, we focus on two categories of authentication that present both immense potential as well as potentially immense risk if not designed well: biometrics and environmental modalities.

The model itself is fairly simple, classifying authentication modalities into three buckets of decreasing levels of security and commensurately increasing constraints. The primary tier is the least constrained in the sense that users only need to re-enter a primary modality under certain situations (for example, after each boot or every 72 hours) in order to use its capability. The secondary and tertiary tiers are more constrained because they cannot be set up and used without having a primary modality enrolled first and they have more constraints further restricting their capabilities.

We will delve into Android biometrics in the next section.

A closer look at Android biometrics

Biometric implementations come with a wide variety of security characteristics, so we rely on the following two key factors to determine the security of a particular implementation:

We use these two factors to classify biometrics into one of three different classes in decreasing order of security:

Each class comes with an associated set of constraints that aim to balance their ease of use with the level of security they offer.

These constraints reflect the length of time before a biometric falls back to primary authentication, and the allowed application integration. For example, a Class 3 biometric enjoys the longest timeouts and offers all integration options for apps, while a Class 1 biometric has the shortest timeouts and no options for app integration. You can see a summary of the details in the table below, or the full details in the Android Android Compatibility Definition Document (CDD). 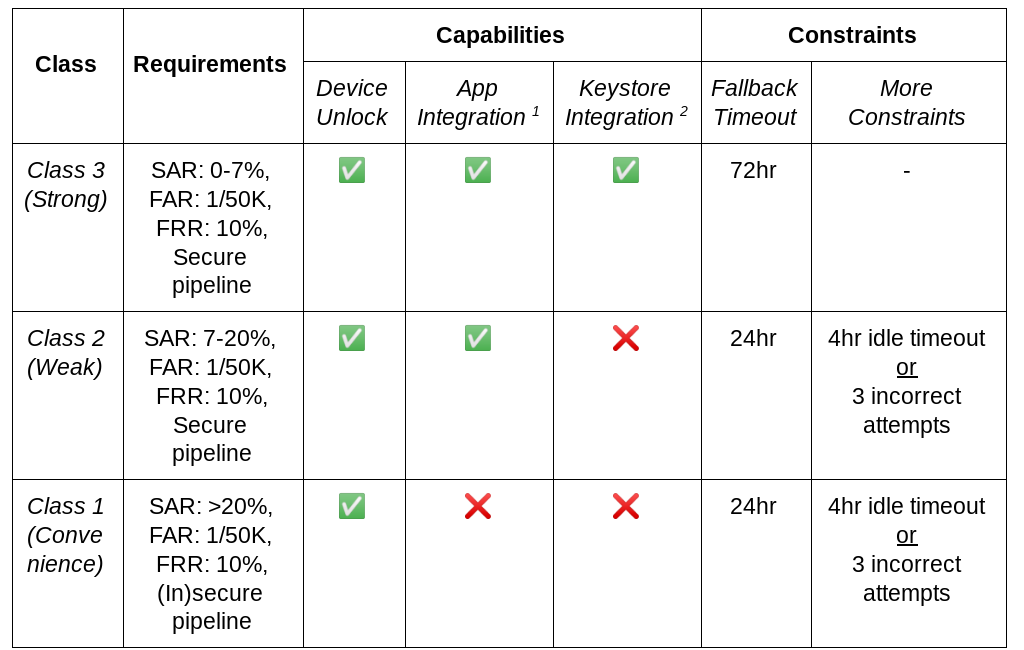 Biometrics provide convenience to users while maintaining a high level of security. Because users need to set up a primary authentication modality in order to use biometrics, it helps boost the lockscreen adoption (we see an average of 20% higher lockscreen adoption on devices that offer biometrics versus those that do not). This allows more users to benefit from the security features that the lockscreen provides: gates unauthorized access to sensitive user data and also confers other advantages of a primary authentication modality to these users, such as encrypted backups. Finally, biometrics also help reduce shoulder surfing attacks in which an attacker tries to reproduce a PIN, pattern, or password after observing a user entering the credential.

However, it is important that users understand the trade-offs involved with the use of biometrics. Primary among these is that no biometric system is foolproof. This is true not just on Android, but across all operating systems, form-factors, and technologies. For example, a face biometric implementation might be fooled by family members who resemble the user or a 3D mask of the user. A fingerprint biometric implementation could potentially be bypassed by a spoof made from latent fingerprints of the user. Although anti-spoofing or Presentation Attack Detection (PAD) technologies have been actively developed to mitigate such spoofing attacks, they are mitigations, not preventions.

One effort that Android has made to mitigate the potential risk of using biometrics is the lockdown mode introduced in Android P. Android users can use this feature to temporarily disable biometrics, together with Smart Lock (for example, Trusted Places and Trusted Devices) as well as notifications on the lock screen, when they feel the need to do so.

In order for developers to benefit from the security guarantee provided by Android biometrics and to easily integrate biometric authentication into their apps to better protect sensitive user data, we introduced the BiometricPrompt APIs in Android P.

There are several benefits of using the BiometricPrompt APIs. Most importantly, these APIs allow app developers to target biometrics in a modality-agnostic way across different Android devices (that is, BiometricPrompt can be used as a single integration point for various biometric modalities supported on devices), while controlling the security guarantees that the authentication needs to provide (such as requiring Class 3 or Class 2 biometrics, with device credential as a fallback). In this way, it helps protect app data with a second layer of defenses (in addition to the lockscreen) and in turn respects the sensitivity of user data. Furthermore, BiometricPrompt provides a persistent UI with customization options for certain information (for example, title and description), offering a consistent user experience across biometric modalities and across Android devices.

As shown in the following architecture diagram, apps can integrate with biometrics on Android devices through either the framework API or the support library (that is, androidx.biometric for backward compatibility). One thing to note is that FingerprintManager is deprecated because developers are encouraged to migrate to BiometricPrompt for modality-agnostic authentications.

Android 10 introduced the BiometricManager class that developers can use to query the availability of biometric authentication and included fingerprint and face authentication integration for BiometricPrompt.

In Android 11, we introduce new features such as the BiometricManager.Authenticators interface which allows developers to specify the authentication types accepted by their apps, as well as additional support for auth-per-use keys within the BiometricPrompt class.

More details can be found in the Android 11 preview and Android Biometrics documentation. Read more about BiometricPrompt API usage in our blog post Using BiometricPrompt with CryptoObject: How and Why and our codelab Login with Biometrics on Android.

Read more from the Source

VirusTotal Releases Ransomware Report Based on Analysis of 80 Million Samples

VirusTotal Releases Ransomware Report Based on Analysis of 80 Million Samples